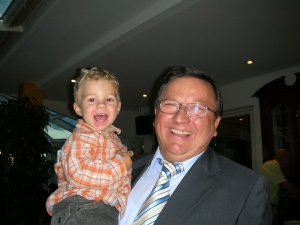 Stephan, his son who’s an architect in Ireland, cornered me a while back and said that he was going to do his usual laudatio – about 10 minutes, he reckoned – and would I please follow up with a few personal words?

Great pleasure (and honour, in fact)

So we’re all gathered at the restaurant last Saturday and Stephan gets into what I recognise as his standard speech on occasions like these.

This time it’s different, though.

He gets to the bit about the hardship of his father’s early years in Silesia (now Poland) and the sacrifices his parents made to bring the 3 children to Germany, when there’s a series of dull muffled thuds, Stephan looks perplexed, stops in midstream and does a “Well,thanksverymuchandI’dliketoproposeatoasttomyfatherHappyBirthday,Dad,andI’veasked
JohnBurlandtosayafewpersonalwordsaboutDad”

So I do my 2 minutes about Christoph (won’t bore anyone with the details, but tears were shed…) and everyone was quite happy, especially when I kicked into Polish at the end.

So I asked Stephan what happened.

“What happened?” he said “What HAPPENED? My bloody SISTER started kicking me under the table, THAT’s what happened! So I thought I better finish quickly to avoid continuing pain”

Followed closely by Susie, his younger sister, who said how much she’d liked what I said and “when he started on about Poland again, I gave him a couple of solid kicks. I mean, how often have YOU heard the story?”.

“4, maybe 5 times. But he ALWAYS tells the story. People expect it” I said

“Well, bad luck. Not any more” she said.

So here’s the story.

Silesia had been German since its seizure by King Frederick the Great of Prussia in 1742, with a population of 4 million.
Germany invaded Poland in 1939, the Soviets seized it back in 1945 and the Yalta and Potsdam agreements decreed it to be Polish.
Mass expulsion and imprisonment follows for the majority of the ethnically German population.

So Christoph’s family – lucky to escape significant persecution – is now Polish, forbidden to speak their mother tongue and marginalised by an understandably belligerent society.

Christoph meets Uschi, they marry, have 3 kids and shortly after Sonya’s born are permitted to emigrate to Germany as part of some greasy deal (involving large amounts of folding stuff) with the Polish government.

So they arrive here with nothing, hardly able to speak German and with no contacts apart from a few people from their village who had emigrated earlier.

Christoph’s the much-loved janitor at the Vertical Village where Ms. jb works, Uschi works at the University clinic, all the kids (who are great, btw) have either tertiary or business qualification and are married with kids of their own (or on the way, in Stephan and Aine’s case).

I thinks it’s a story worth telling, anyway.

No matter what Susie reckons…..

(That’s her youngest, Kalle, with Grandad)

05 Oct This entry was published on 5 October, 2007 at 14:39. It’s filed under Uncategorized and tagged birthday, christoph niklas. Bookmark the permalink. Follow any comments here with the RSS feed for this post.