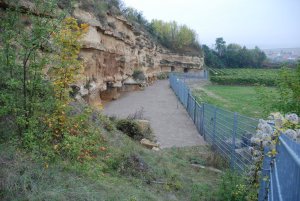 I was having a bit of the moan the other day, envying my mate R&R in the Netherlands his proximity to the sea.

He, in return, wished for vineyards just around the corner.

Well, sport, I’ve discovered the ideal possie for us.

This is the Weinheimer Trift. When the Mainz Basin – all 1.3 million acres of it – was a subtropical sea, this was a white sandy beach, lined with palms.

I kid you not.

In the sea, you would have found crocodiles, turtles, sea cows, sharks and stingrays. On land, flamingos, pelicans, rhinos, tapirs, apes and elephants.

The sand’s long gone, but the cliffs are still there, with skeletal remains of sea cows, fossilised sharks’ teeth and more bivalves that you you can say “she sells seashells on the seashore” to.

Which is why the place is sealed up tighter than Guantanamo.

Without the shackled figures in dayglo orange overalls, that is.

14 Oct This entry was published on 14 October, 2007 at 08:10. It’s filed under Uncategorized and tagged Mainz basin, weinheimer trift. Bookmark the permalink. Follow any comments here with the RSS feed for this post.