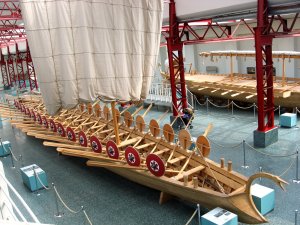 You have no idea how long I’ve waited to drop that little nugget of Latin into conversation. It translates to “with oars and sails” (and incidentally was my high school’s motto).

This is a reconstruction of one of the Roman boats whose ruins were found during the early stages of laying the foundations for the extension of the Hilton in Mainz. Naturally, jb has already blogged about the discovery and the ensuing formation of the Museum of Roman Shipbuilding on Neutorstrasse (where this picture was taken).

15 May This entry was published on 15 May, 2008 at 15:26. It’s filed under Mainz and tagged museum, Roman. Bookmark the permalink. Follow any comments here with the RSS feed for this post.