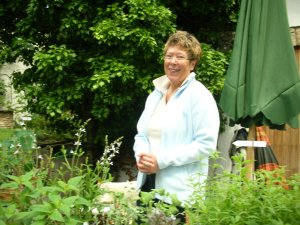 Odile Landragin is legendary in these parts for her stunning herb and aromatics garden.

So legendary, in fact, that the local paper has assigned her the elevated status of Official French Fan for the duration of Euro 2008, which involves getting your picture in the paper and making wild forecasts* of the score of the upcoming matches involving Les Bleus.

(*In her case, not very accurately, but anyway…)

She also has an army of helpers who jump into the breach when she’s off doing lectures on herbs (“It doesn’t HAVE to be mint” is one of them) or is otherwise engaged.

They go under the generic name of the “Fleissigen Lieschens” or “Buzy Lizzies” and here’s one of them whom we bumped into at one of the participants at the Open Gardens day today, selling some quite unusual plants.

Mukunuwenna (Alternanthera sessilis), for example, a Sri Lankan (Ceylonese to the rest of you..) staple that’s a sort of leafy vegetable (use it in salads) and is good for the kidneys and eyes according to TCM.

I wish she’d had something for the brain, because mine’s definitely shot and I can’t for the life of me remember her name (It’s Sibylle, by the way)

But I just smile and bellow “Lieschen!” in a joyous voice and she appears to be quite happy with that…

16 Jun This entry was published on 16 June, 2008 at 06:00. It’s filed under Mainz, Region and tagged Botanics, ober-hilbersheim, Sibylle Kallweit. Bookmark the permalink. Follow any comments here with the RSS feed for this post.