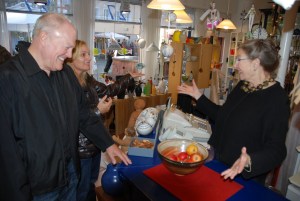 Reece and Alicia, an exceptionally pleasant (despite his being a Corporate Lawyer – the Devil Incarnate, no less. Boo, hiss, where’s the garlic?) couple of Americans living Frankfurt, turned up in Mainz yesterday and were in a severe state of shock.

More people in town than you could wave a stick at.

“Is it like this EVERY Sunday?” they asked “Shops actually OPEN?”

I think they were on the verge of moving here.

Sorry to disappoint them, but the last Sunday (Sonntag) in October was historically the day on which country folk headed for the big smoke to get themselves kitted out with a new coat (Mantel) for All Hallows (1 November).

So no, Sundays are normally as dead as.

Mrs jb obviously misunderstood the concept, though, and plumped for an outrageously expensive brown cord jacket instead, but I figured that a coat would have been even expensiverer and let it slide….

Taken at Studio 37 in the Kirschgarten.
Not at all posed
(Cough, cough…)

26 Oct This entry was published on 26 October, 2009 at 12:00. It’s filed under Mainz, People and tagged Festivities. Bookmark the permalink. Follow any comments here with the RSS feed for this post.