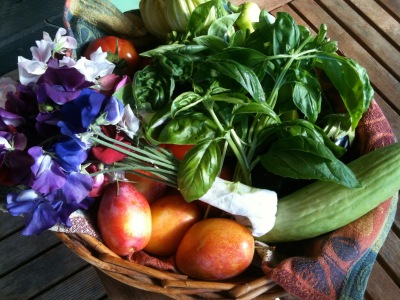 Cameron and Maria turned up with yesterday afternoon (plus a rigger of beer from Golden Beer) when they came around for sundowners and nibbles.

All from their own 5000m2 garden in Tasman, where they run the Tasman Village Cottage.
We stayed there once, maybe twice and hit it off pretty much straight away.

Cameron’s a captain on Air New Zealand’s Q300 fleet flying out of Wellington, Maria used to bake for the Tasman Store (her shortbread is heavenly) and – as far as I recall – they met in Europe (Maria’s Austrian) while they were both ski instructing.

Really good evening – conversation went from the local gossip to “Do you think Germany will bail out Greece?” to friends in Washington at the World Bank doing venture capital exercises in the Third World to the usual banter about pilots (him) being a bunch of prima donnas and management (me) not valuing them.

Could only have been better if they’d brought Sam and Zoe, the Golden Retrievers, along…

05 Mar This entry was published on 5 March, 2010 at 01:34. It’s filed under not the nelson daily photo and tagged tasman village cottage. Bookmark the permalink. Follow any comments here with the RSS feed for this post.