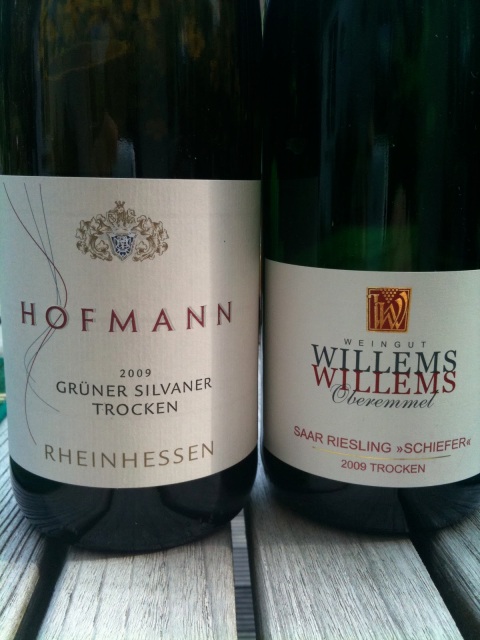 Jürgen and Carolin Hofmann are true shooting stars among the new generation of vintners.

She’s been named “Young vintnerin of the year” by none less than Stuart Piggot and Jürgen crafts wines that are elegant to the max and sell out almost instantly.

His vineyards are in Appenheim (Dialect: App’nm”) and hers are on the Saar river, a mere 150km away.

They’re married, have just built a new house in Appn’m and by amazing feats of jungling, sleight of hand and whatever, they manage to keep things on track at this rarified level of quality.

And have 2 kids, Johanna and Paul.

Proper names, not fashionable stuff like “Kevin” or “Kiara”.

We don’t buy a lot of wine, but Jürgen’s always first port of call when the new vintage is out.

Call his number to see if he’s in.
Get Gran, who gives me (incorrectly) his cell phone number.
Drive down on the off chance and only Gran’s home at the vineyard.
Tells us to drive up to the new house, bound to be there.
Which they are, but they’re meeting with the architect.

“Oh look” says Jürgen “We know each other well enough – you know where the fridge is, go and do some tasting and we’ll be down as soon as we can”

So we get the usual suspects out of the fridge, start working our way through them, are joined by a mate of Jürgen’s who wouldn’t mind trying either and then a trucking outfit turns up, so I help him sorting out which pallets of wine to pick up and then we try some more and Carolin turns up with Paul who gets unceremoniously plonked on Mrs jb’s lap where he’s cuddled for 20 minutes or so while Carolin zips around organising stuff.

And on it goes.

Jürgen turns up at some stage with Johanna (who sort of knows us by now) and then his Mum and Dad turn up and greet us like long-lost friends.

And Mum – “Gran”, actually – says firmly but kindly to Johanna “Now, I can’t hear what you’re saying around that cup, so you’ll first need to take it away from your mouth and ask me again”

This is the only way to buy wine….

11 Jun This entry was published on 11 June, 2010 at 11:00. It’s filed under Culinary, Mainz and tagged Appenheim, Carolin Hofmann, Carolin Willems, Jürgen Hofmann, wine. Bookmark the permalink. Follow any comments here with the RSS feed for this post.