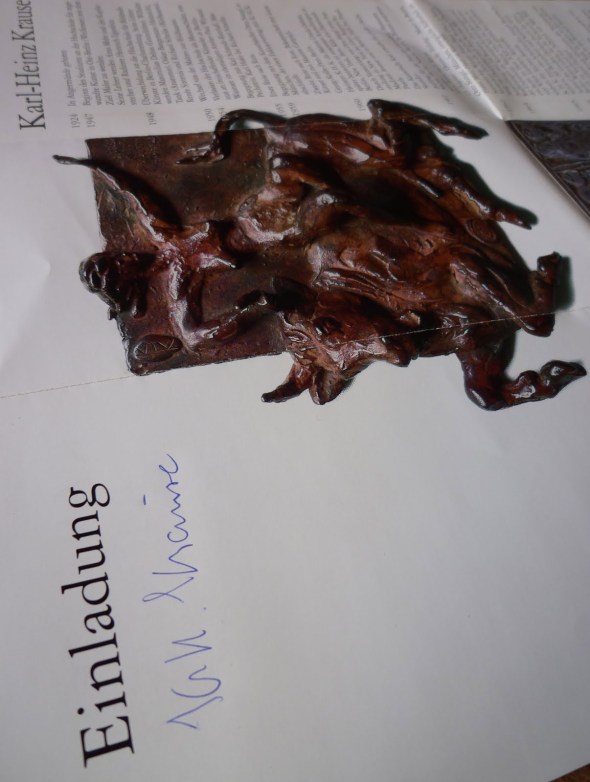 This is a good story.

Elements of revolution and conspiracies, provincialism and politics, neglect and vandalism, war and peace, fire and water.

Yesterday, I had coffee with Karl-Heinz Krause and his wife, Ursula to shed some light on the mystery of the gates at the Gutenberg museum.

I told them to let me know when they’d had enough – he’s 87, she’s 79 – but the topics of conversation never dried up and 3 hours later we were still talking.

This a story you couldn’t make up if you tried.

It starts in Berlin at the end of the war with a young art student who’s recently been released from PoW camp and ends in a sunlight-flooded atelier in a house in one of Mainz’s leafy suburbs where one of the most important German sculptors of the post-war period lives, virtually unrecognised and where one of his major works sits anonymously between a 1000 year old cathedral and the most important printing museum in the world.

It’s going to be in episodes, it’ll start in a couple of weeks and by that time I’ll have learnt how to cast bronze sculptures in sand, cleared up some details with the Krauses and photographed great chunks of the gates.

And we’ll have done the Gutenberg museum’s job for them.

Which is to preserve cultural knowledge for future generations….

And if Gucki would like to give me a call/txt on zerooneseveneightsixninezerofivesixtwothree, I think we should get this on Wikipedia. Or anywhere.

12 Apr This entry was published on 12 April, 2011 at 11:00. It’s filed under Gutenberg Museum, Mainz and tagged gates, Karl-Heinz Krause, Ursula Krause-Oehme. Bookmark the permalink. Follow any comments here with the RSS feed for this post.