I don’t believe that this chappy died of choking, despite an emergency tracheotomy….

Gumboots are standard footwear, Toyota HiLux is common transportation and blokes are rugged and taciturn.

So when the Appleby Highway as it passes the Travellers Rest pub is lined with pick-ups, utes, 4WDs and similar on Queen’s Birthday weekend Monday, you know that it’s unlikely that the New Zealand Symphony Orchestra is giving a Mozart concert.

From the carnage on display after a day’s shooting, it’s probably wise to have stayed at home on the day.

Pretty much anything that moved.

Wearing a fur coat and going for a walk in the bush would not have been a good strategy….

Reporter for the Waimea Weekly appropriately dressed for the occasion, the occasion being the aforementioned Mozart concert.
Ballerinas, mud and blood are imiscible. 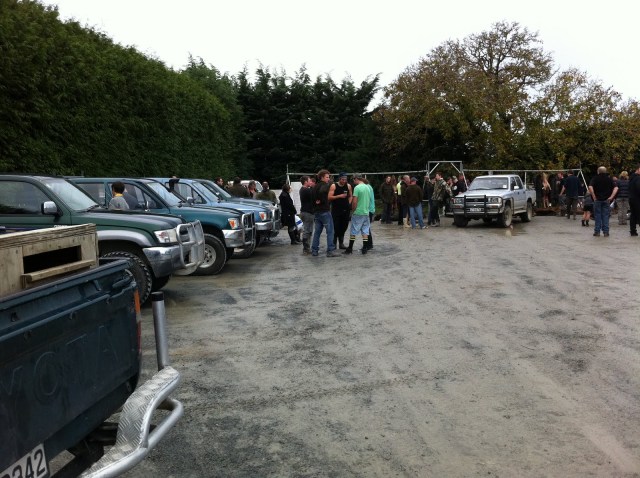 Shoot some pigs, gut them, string them up, drink some piss Tui. Good way to spend a day, eh.

10 Jun This entry was published on 10 June, 2011 at 11:00. It’s filed under (Not) the Nelson Daily Photo, not the nelson daily photo and tagged pig hunting, richmond, waimea weekly. Bookmark the permalink. Follow any comments here with the RSS feed for this post.