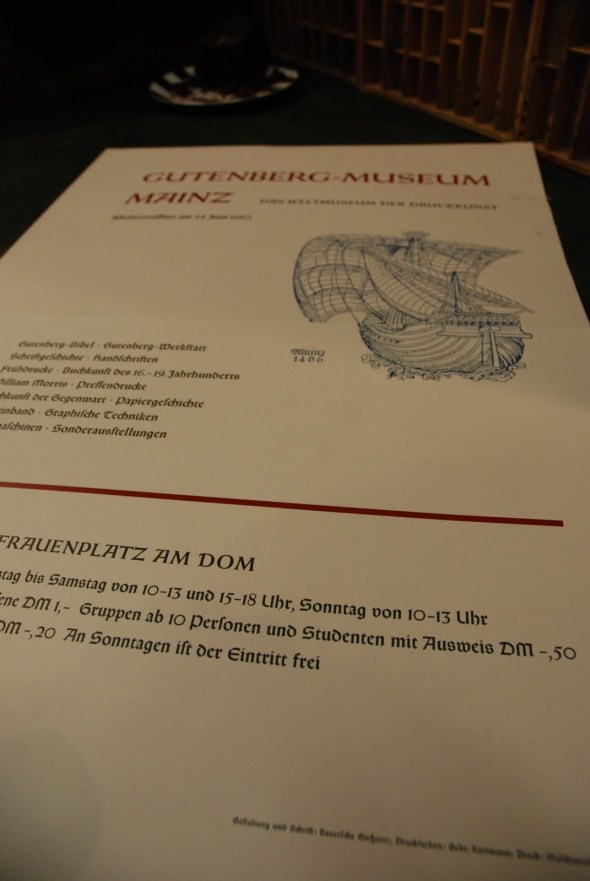 I wanted to close the circle.

I wanted to find one of the original plates that Karl-Heinz Krause used to model his panels and then juxtapose it with the imprint.


We know that he returned them (if there was ever any doubt…) because the galleon under full sail that you’ll see on one of the gates turned up on a poster printed by the museum’s print shop.


But where are they?

I drifted into the Print Shop and told a lady there what I was doing and what I was looking for.

“You actually KNOW something about the gates? REALLY? I can’t BELIEVE it! People ask us ALL the time and we can’t tell them ANYTHING about them”


So I relate the story and she’s saying ” Oh, this is GREAT! We help people do rubbings of the plates and we even do impressions in clay with littlies for them to take home”


She didn’t have the plates but she knew who might be able to help me further.

No, HE didn’t have the plates, but there’s a cupboard he inherited from his predecessor and he’s not quite sure what’s in it.


Except that they’re doing some work in the basement and the cupboard would appear to be currently inaccessible, hemmed in by pallets of papaer.


He’s promised to get back to me sometime next month.

26 Jun This entry was published on 26 June, 2011 at 07:00. It’s filed under Gutenberg Museum, Mainz, The gates of the Gutenberg Museum and tagged Druckladen, Karl-Heinz Krause, Otto Stangl, Peter Krawietz, Rainer Schell. Bookmark the permalink. Follow any comments here with the RSS feed for this post.