Up until the 1960s, most villages around here had a Backhaus, a communal bakery that was fired up weekly and where you took the loaves that you’d prepared at home to be baked for a small fee.

Good excuse for a chinwag, of course, and a great idea from a fire prevention perpective – instead of having EVERYONE stoking up a fire in a dodgy oven at home, you’d have someone who actually knew what he (as in “male”) doing.

So you’ll still find a Backhausstrasse in virtually every village.

Of course, most villages had their own baker, making 7 different types of rolls, 5 different types of bread and more cakes and pastries than you could shake a stick at.
A big treat for someone growing up in a monoculture of white bread: Sydney Flat was the loaf of choice in New Zealand in the 1960s – an oblong block of nothingness enclosed in a beige crust.

These days, village bakeries are going the way of the Backhaus (not to mention the dodo) being rapidly replaced by these things in discount supermarkets.

Press a button and a compressor directs a blast of hot air at a piece of frozen dough that’s been spat out of a machine in Poland weeks ago, turning into something that visually resembles (and smells like) a loaf of bread.

Better than a Sydney Flat, mind you…

Ms Mura’s exhortations to publish something edible are to be obeyed.
Shops and bakeries closed today – May Day, public holiday – so here’s Ms jb’s rhubarb cheesecake. 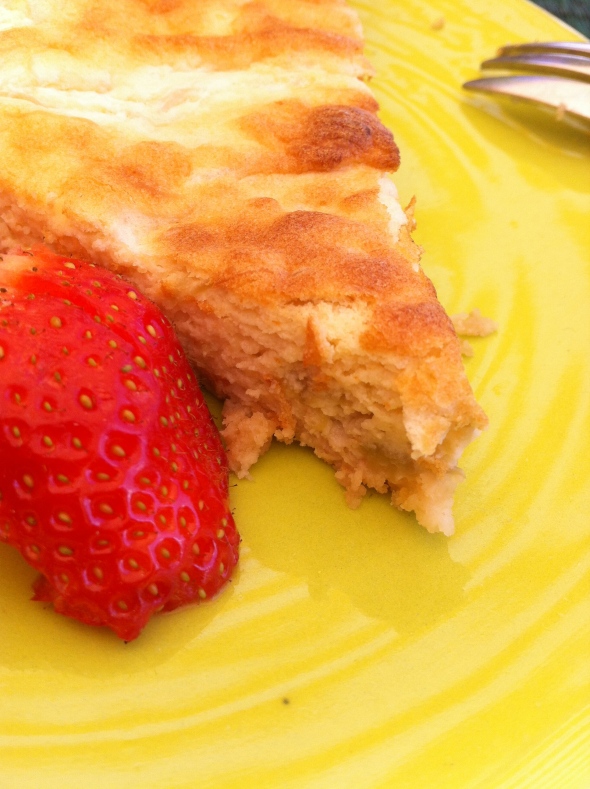 01 May This entry was published on 1 May, 2012 at 13:00. It’s filed under Mainz, Monthly Theme Day, Region and tagged Backhaus, Klein-Winternheim. Bookmark the permalink. Follow any comments here with the RSS feed for this post.