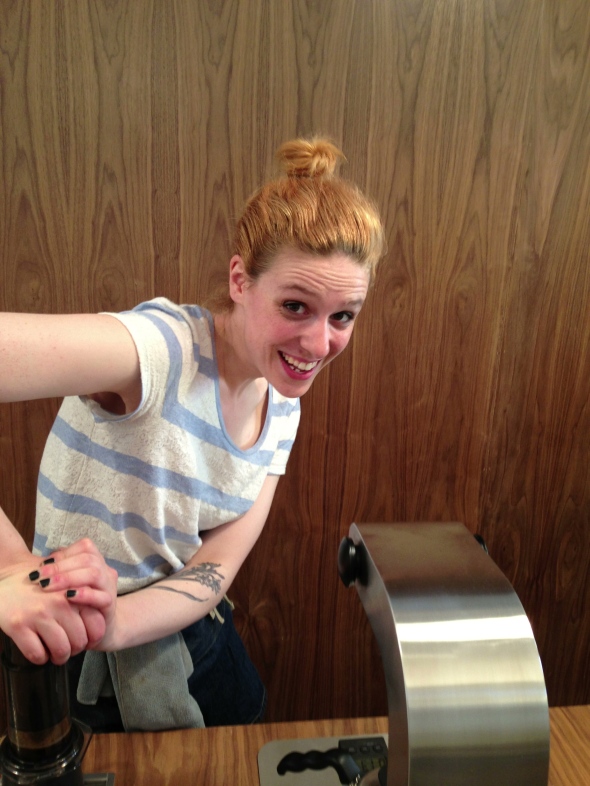 When I was in London last week for a school reunion of the Westlakers diaspora*, Paul from kaffeekommune zwei recommended that I rock on over to Talkhouse Coffee in Portobello Road.

“And say “Hi” from me” he said, having worked as a barista at Rapha Cycle Cafe in Soho and knowing the “scene”, as it were.

“Anyone here know Paul Bonna from Mainz in Germany?” I asked when I was ordering my doppio.

“Oh, you mean Handsome Paul” piped up …er…Elyse….the Canadian baristeuse (pictured). “But don’t tell him I said so….”

So when I get back to Mainz and tell this to (a blushing) Paul, I notice a copy of “Sweet Paul” lying around.

Is this the start of a personality cult?

* The New Zealand diaspora is quite significant, both in size and in qualification. New Zealand has a resident population of around 4 million and a non-resident population of close to 1 million. About half that number live in Australia, the rest spread around the globe and mostly earning salaries that would put them in the top 3% in New Zealand.
The guys I met last week were mostly in their late 20s to mid/late 30s – lawyers, accountants, management types – and none in a great rush to get back home, citing career and earning opportunities as their main reasons for staying in Europe.

The best and the brightest, as the saying goes….

18 Jul This entry was published on 18 July, 2013 at 13:00. It’s filed under Altstadt, Commerce, Culinary and tagged gaustrasse, Kaffeekommune Zwei, London, Paul Bonna, Portobello Road, Talkhouse coffee. Bookmark the permalink. Follow any comments here with the RSS feed for this post.