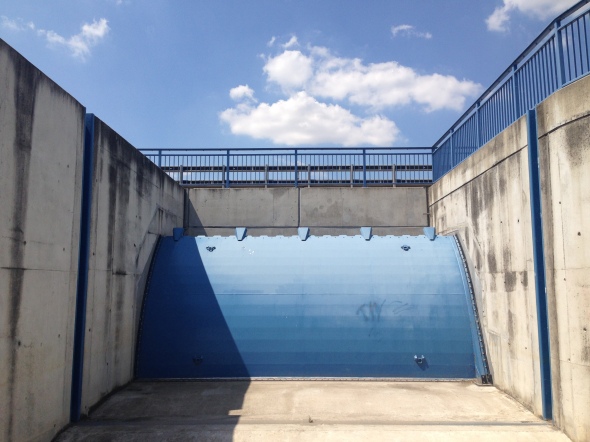 The cycle track along the Rhein takes you past some interesting stuff, but none more impressive than the massive floodgates (fish belly flap gates, if you want precision…) set into the dike separating the river from the flood meadows at Bodenheim and on which is built a major road that runs from Mainz to Worms.

If the Rhine gets uppity, they’ll open the gates and let the water into an area of 190 ha (470 acres, in old money) with a capacity of 6.7 million cubic metres, dropping the level of the river enough to save some poor souls downstream from mopping out their living room.

There’s another one further downstream at Ingelheim of 160ha and  4.5 million cubic metres.

Just in case things get really out of hand…

16 Jul This entry was published on 16 July, 2014 at 14:32 and is filed under Agriculture, Mainz. Bookmark the permalink. Follow any comments here with the RSS feed for this post.