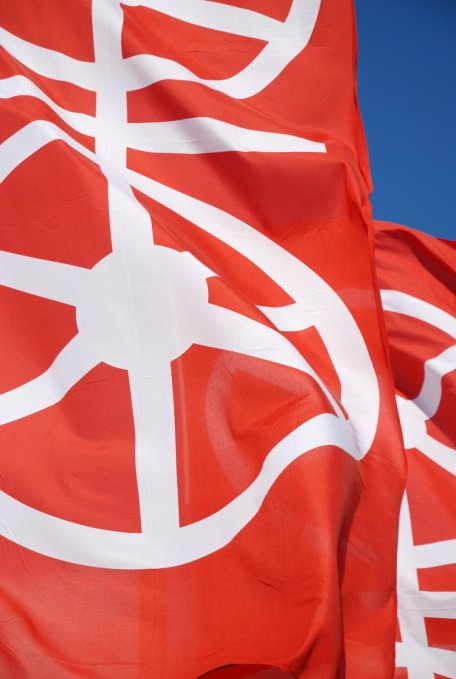 Received knowledge around this Hals des Waldes is that the linked wheels on Mainz’s crest are attributed to Bishop Willigis and the fact that his father was a wheelwright.

So it was a sort of “Thanks for that, Dad, and I’ll see you right” gesture.

Shame that crests only came into being in the 12th century.

And Willigis died in the 9th….

So much for that.

To find a more plausible yarn, we have to dig up our old mate St. Martin.

Or even the Book of Ezekiel in the Old Testament, where the prophet has a vision in June 593 BC (that’s what it says here..) involving God’s chariot – the merkaba – and all of a sudden (well, 1.8 millennia later, to be exact), St Martin turns up in a picture, brandishing a set of wheels.

And then the Archbishops of Mainz think “Aha, let’s be smart and brand ourselves currum Dei – Drivers of God’s Chariot. Even better: currum ecclesiae Moguntinae aurigantes – Drivers of the Chariot of the Church of Mainz.”

Which is how Mainz got its wheels. (These ones are flags on the market square in front of the cathedral. They’re all over the place. Even on manhole covers.)

Of course, if we find out that wheels and chariots were only invented in 500 AD, then that story’s stuffed as well…

05 Mar This entry was published on 5 March, 2007 at 07:15. It’s filed under Uncategorized and tagged Uncategorized. Bookmark the permalink. Follow any comments here with the RSS feed for this post.