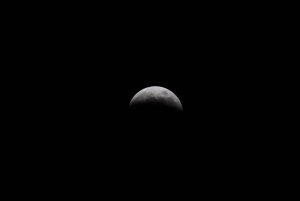 Technically yesterday’s MDP, but if I’d waited until after midnight, the eclipse would have been total which makes for images of limited interest.

We had the usual festivities one has in primitive cultures – chickens were slaughtered to ward off evil spirits.Dogs met an untimely end to appease the gods.

I believe that virgins were the traditional sacrifice , but they’re in short supply around these parts, I’m told.

If there are any left at all.

03 Mar This entry was published on 3 March, 2007 at 23:27. It’s filed under Uncategorized and tagged Uncategorized. Bookmark the permalink. Follow any comments here with the RSS feed for this post.