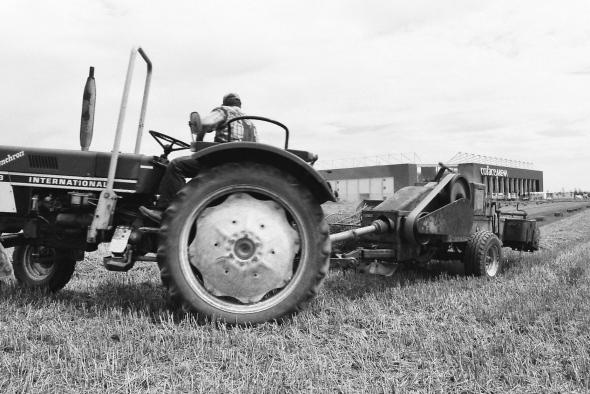 This is one of the guys who got to keep his land when they built Mainz 05’s new football stadium.

I have no idea what his harvester looks like, but this baler is at least as old as my camera* and once he’d finished baling, he drove around on his tractor while son heaved each bale onto the trailer and Mum manhandled it until it was stacked right.

* I put a 125ASA monochrome Ilford film into my Nikon F2AS (bought used in Osaka in 1981) , set the 28mm lens to f22 and infinity and shot the film in and around the Coface [“Cofarce” in Local Speak, but please don’t tell them…] Stadium.

A selection of the work’s featured in the “A day at...“series at YMBFA

05 Sep This entry was published on 5 September, 2011 at 08:00. It’s filed under Agriculture, Mainz, Mainz 05 and tagged Coface Stadium, Nikon F2AS. Bookmark the permalink. Follow any comments here with the RSS feed for this post.