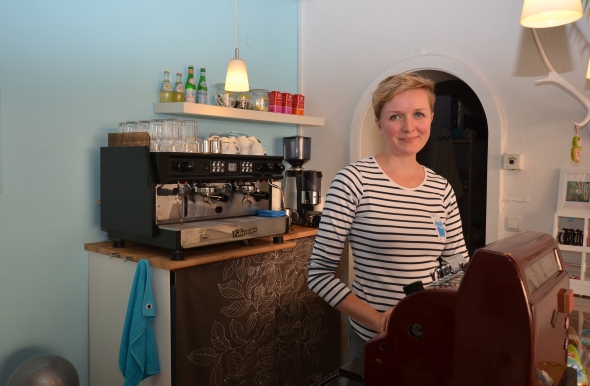 Uli  (for Ulrike)  Zawar is the owner of “Sonntagskind“, a shop that can’t make up its mind* whether it’s an espresso bar or a kiddy clothes shop.

Uli’s Gran was a seamstress and taught her how to sew.
Uli liked drawing.
She had no idea at the time that she’d end up as a graphic designer in the advertising industry.
And a seamstress.
Which is what happened.

Fast forward to 2005.
She’s expecting her first child and starts designing and sewing outfits in eager anticipation.
Friends like them, friends of friends like them and she starts making and selling to order.

Fast forward to 2009.
Second kiddy’s there, she’s still making and selling to order and someone suggests that she exhibits at a small Christmas market in Gonsenheim.
And at an Easter market in 2010.

Demand goes crazy and she and her husband Bernd (the guy who’s Mainz’s Cycle Czar  with the unenviable job of keeping us cyclists happy in Mainz by providing us with kilometers of pristine cycle tracks. With no budget.)  think:  “There might be a small business  in there somewhere.”

Bernd’s parents used to have a small clothing business (started by his Gran, Katharina Roth) in the Kirchstrasse in Gonsenheim. He grew up over the shop.
He and Uli started collecting “stuff” at flea markets and once they’d got enough to outfit a shop, they took over the lease.
Bernd said “How about buying a decent espresso machine?” and “Sonntagskind” was born.

That would be Uli.
Born on a Sunday.

But apart from Wednesday, she seems to be a fairly good fit for any day of the week.

20 Sep This entry was published on 20 September, 2012 at 13:00. It’s filed under Commerce, Mainz, People and tagged Bernd Mayer-Zawa, Gonsenheim, Katharina Roth, Kirchstrasse 23, Sonntagskind, Uli Zawar. Bookmark the permalink. Follow any comments here with the RSS feed for this post.